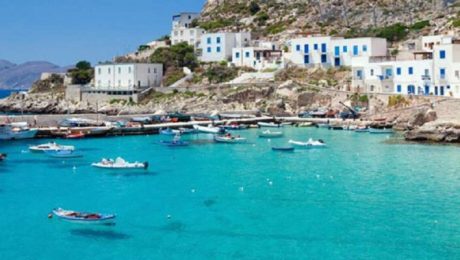 The Island of Lipari is a combination of comfort, relax and natural beauty. It is the largest and the best known of all islands , even from touristic point of view is more versatile. The historic center is characterised by broad streets full of shops  and is ideal for long afternoon walks or a delightful dinner in one of the local restaurants.

The Lipari Island is the first island to be inhabitated and is considered the “artistic-cultural” pearl of the archipelago. The historical importance of the Island is testified by the Archeological museum which houses remains found in the Aeolian Island dating back  more than 5000 years.  More recent but not less thrilling is the “Palazzo dei Vescovi” adjacent to the majestic cathedral.It is absolutely worth visiting it for who is interested in the culture of the people living on this island. The cathedral of St. Bartholomew is the most important building on Lipari. Particularly noticeable are the interiors decorated with floral paintings and frescoes.

You can travel back in time visiting the Norman Cloister  – an ancient structure showing the grandeur of the human race and the strenght of the mighty stones.

Now you can head to “Spiaggia Bianca” – the White Beach, where the seabed formed by pumice sediments will conquer you with its exotic charm. Get ready to be enchanted by the intense turquoise colour of the water and the breath-taking view. From here you can admire the wonderful colors of the rocks of Pietra Lunga e Pietra Menalda and the magnificent Island of Vulcano. The last but not less importati is the beach “Praia di Vinci”, which is defined as an unspoiled paradise. This sandy beach is the ideal place for snorkeling and admiring the crystal waters full of fish. 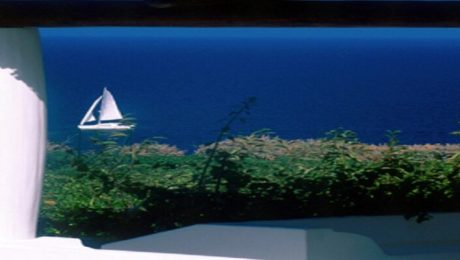 This island feels remote and peaceful, it will welcome you in its magical dimension – uncontaminated sea, surreal silence, wild nature and beautiful sunsets are just part of its magic. Salina is considered the “garden” of the Aeolian Islands – a green oasis with lush verdant landscape far away form the hectic way of modern life. You will be seduced by awesome peaks, where observing stars becomes a singular experience, by volcanoes, by unusual landscapes shaped by mighty nature, and by cosy beaches, which will induce you for relaxing baths into the  crystal Tyrrhenian waters.Here the culture of  cultivating grapes, olives and capers is very well preserved, thanks to the people who inhabited this place maintaining their customs and traditions.

Discover the picturesque villages, the vulcanic crater of Santa Maria called “fossa delle felci”, the Saracen Caves, excavated from tuff, and hidden by dense vegetation, used as a refuge to escape from cruel barbarities committed by Saracens.

You can head to Lingua, peculiar for its beach with pebbles, which reflects itself in crystal clear water. A terrace above the sea leads, through well-known for their good food restaurants,  to a small lake of salty water separated from the sea by a thin strip of ground, once part of saline, from which the island took its name.

Then you can reach Pollara which became internationally famous with the film “il Postino” (The postman) by Massimo Troisi. The beach of Pollara will take your breath away – it extends under a steep cliff crape as an amphiteatre and iso ne of the mos charming places of the Aeolians. At north there is “Balate Bay”, you can arrive to the creek through a steep staircase, crossing the house of the Postman. From this beach you can admire the sunset, considered one of the most beautiful sunsets in the world. The sun iso f a wonderful rd colorand acts as a setting for amazing natural attractions.

The last stop is Leni, called Lenoi by the greeks because of the containers in which was pressed the grape. Situated between  two mountains and comprises the hamlet of Rinella and Val di Chiesa, where the Sanctuary of the “La Madonna del Terzito” is located.

In the small fishing village of Rinella you can admire the wonderful beach of black sand and of a half-moon form, surmounted by caves excavated in the rock used in the past as a shelter for the boats.

If you are keen on snorkeling the low and sandy depths will allow you to admire not only the marina flora and fauna, but also the vulcanic activity called “sconcassi” wich are manifested with gas emanation and vapours. 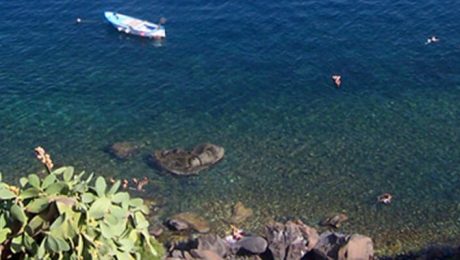 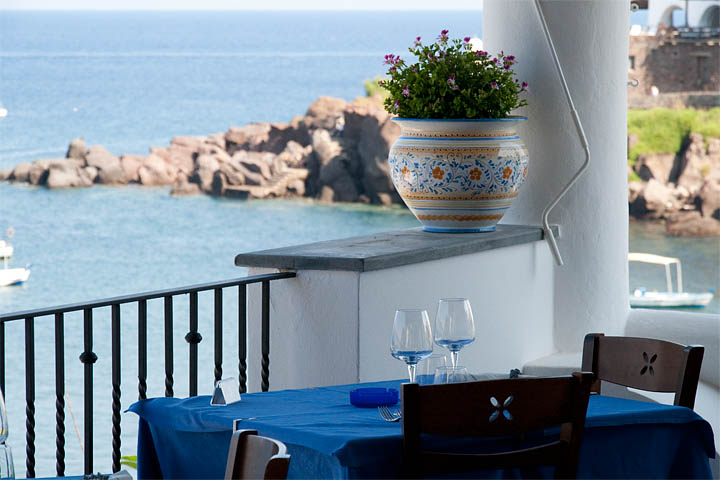 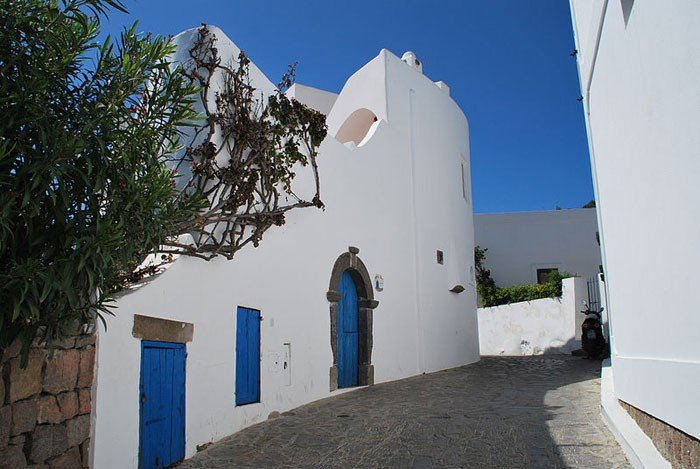 The groups of populations where setiling Filicudi left their footprint of estreme beauty. The history of the Island dates back to ancient roots. Admire the uncontaminated flora and fauna, the wonderful beaches of Capo Graziano, taste the delightful land and sea Filicudian disches.The Mediterranean cuisine is part of the Aeolian culture – do not forget that it starts and goes through flavours.

Experence the magical atmosphere of Filicudi where colors are mixed to make the sunsets unique and surreal. Enjoy the smells and scents of the sea and the mediterranean plants, immerge in the cristalline waters and listen to the silence, hat refreshes the soul and reminds you of being part of the nature.

Get ready for an unforgetable vacation in a paradise found on earth.Many of the antic villages remained intact – Monteguardia is the only place on Filicudi in which you can contemplate the picturesque images of the six sisters and the Sicilian coast. Admire Promontory of Capo Graziano and Valdichiesa, locality named after  the Saint Stefano Church where the houses have kept he cahracteristics of the Aeolian agrarian villages. Cross the sanctuary which leads to Monte Palmieri, where due to logistic difficulties the houses were not restored and have remained intact.Discover the prehistoric ghost village of Zucco Grande – a locality popolated by the greeks many years ago,now abandoned and due to the migratory movements overwhelmed by wild nature. 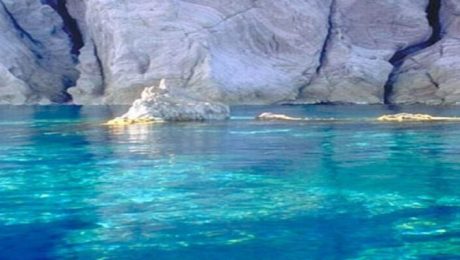 Solitary and unspoiled it is one of the seven islands forming the Aeolian Archipelago. Alicudi is a wild island with a landscape  of high rocky coasts determind by the vulcanic eruptions in the past. The time has stopped here, cars are nowere to be seen, even the roads are not covered with asphalt.

The only thing that exists here is the natural beauty of the long walks through old shrines and pathways.  The whole island is a pearl of  natural and unspoiled beauty. The only means of trasport is the donkey. You can enjoy the islan’d views constituted by the colorful fisherman’s boats and admire the cristalline waters.

On this island far from modern technology and hectic way of life, you can appreciate the tranquility that this place can offer you . Immerge completely in the atmosphere where authenticity and natural beauty unite and become a synonym of a relaxing holiday.

Visiting the little villages remained intact, you will perceive the love and respect that the local people tribute to their piece of land. The timeless villages of Tonna, San Bartolo, Pianicello e Sgurbio, ready to enchant every visitor, are reachable by foot 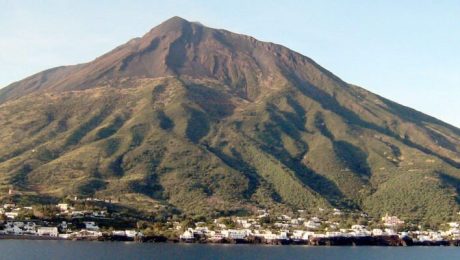 Stromboli  is considered the “black pearl” of the Aeolian Islands. The high cliffs are broken by small beaches with black sand alternating caves and inlets. The white mediterranean houses, the green palms, the olive trees, the scent of citrus and the blue sea will capture your senses and refresh your body and soul. You will remain impressed by “Iddy” – an amasing vulcano overlooking the sea. Iddy offers a uniquie performance especially during the night when explosions and hurling of pebbles illuminate the sky.

Far away emerging out of the blue haze is Strombolicchio  – a rugged and uninhabitated Island, meaning little Stromboli. You can head to the small and peaceful village of Ginostra . Enjoy the beautiful beaches of Piscità and the numerous beach coves nesteled between cliffs of lava stone. From here you can admire the famous Sciara del Fuoco.
In the night you can witness the explosions and hurling of lapillos with a frequencey of every 15/20 minutes. 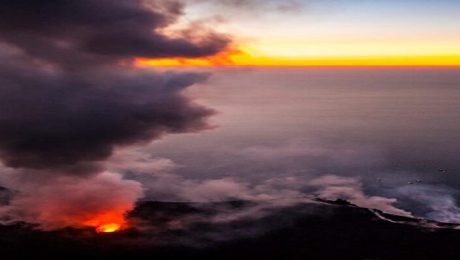 Vulcano is the Island that recalls the ideal relationship of man with the primeval and the need to feel part of the nature. You will enter another surreal time dimension which colors mix with those of the other six islands.You can admire the vulcano of Stromboli which seems to send the signs of vapour to the visitors who look at him from the opposite peak. Vulcano is famous for its thermal waters and black and sandy beaches.The characterisic odour of sulfur becomes more intense if you take advantage of the opportunity to go biking to the crater. You will remain impressed by the Peninsula of Vulcanello visible form far away and the natural wonders you will see during your walk. The red soil is a typical characteristic of the rocky vulcanic mountain. The fantastic view from the peak is worth the effort – the Majestic abyss of the “Cratere della Fossa”is stunning, looking almost as a special effect in a theatrical performance with its emissions of sulfur vapours escaping from the earth’s surface.

Your journey can not end here. You can relax in a tranquil cove with black sand “the beach of the donkey”, characterised by tropical nature and combines the love to the green mountain and the passion for the sea. You can enjoy the hot mud and fumaroles for cures useful primarily for the treatment of rheumatism and skin and respiratiry problems. 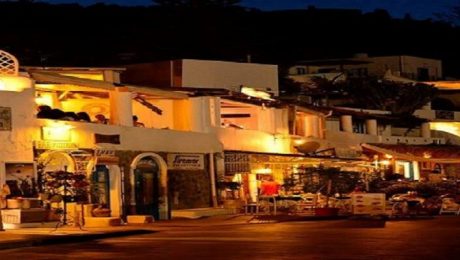 The Island of Panarea is a more renowned and lively destination for inernational tourism. This natural gem has enchanted artists, writers, stylists and musicians and during the summer is full of social life.

Panarea is a mixture of history, art, culture and social life – elements that create unique atmosphere. This is Panarea – a 3,5 km full of charm and beautiful coasts. It is ideal for everyone who likes the night life, trendy locations and bars, luxuroius hotels , but in the same time is is ideal for those who are in the pursuit of absolute relax far away from the hectic way of life. San Pietro is the center of the night life or the glamour core of the Aeolians, where the vacationers invade the most trendy pubs to taste an aperitif, before immerging themselves into the involving sound of the island’s discos.

During daytime you can pamper yourself in the thermal spring “Punta Peppemaria” which gushes hot water (50°) and is used for therapeutic effects. You can admire the church of Saint Peter  – the main religious building  from the 19th century, but consecrated years after. The small museum of Panarea exhibits historic and geological remains dating back to the Neolitic and the mid-Bronze age, almost all found in the prehistoric village Capo Milazzaese, the Calcara and Piano Quartara. You can further explore reaching the Drautto, where a handful of houses sretch along the coast. From here you can reach the “ Caletta degli Zimmari”, where is possible to lie down on the soft sand or dive into the crystal waters of the Tyrrhenian sea.Going on the same direction you reach Punta Milazzese, formerly a prehistoric village. Nowadays  the ruins of the 23 huts that formed the settlement are still visible. You can dive to the famous  Cala Junco – an amphiteatre shaped bay surrounded by bizarre rock formations that create a natural swimming pool. This bay is considered one of the most beautiful not just on the Island but on the entire archipelago because of the amazing colours of the water lapping against the shore that goes from emerald green to deep blue, via turquoise.